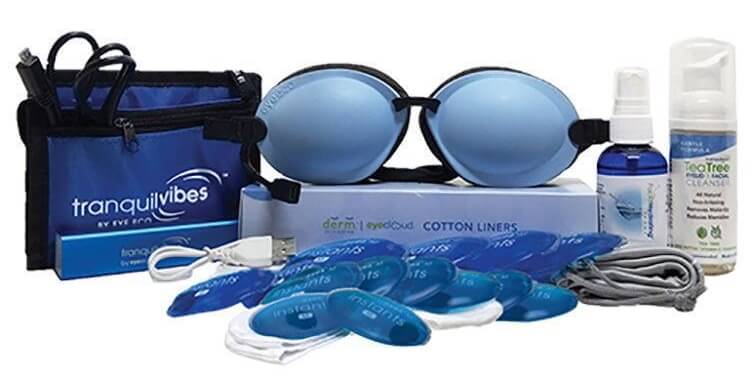 Over the past year, one local optometrist has been focused on alleviating the discomfort associated with an oft-overlooked condition affecting the eyes of an estimated 16 million Americans.

And he’s got an original, home-use product he hopes will help.

An optometrist for 25 years, Dr. Randy L. Peters, of Peters Family Eyecare in Bryan, has suffered from dry eye for much of his life.

First, it was due to a condition found in roughly 40 percent of the population called lagophthalmos, which prevents the eyelids from shutting completely during sleep, leaving a sliver of the cornea exposed.

Then, at age 26, Dr. Randy L. Peters had Lasik surgery, which he said exacerbated his condition.

“My dry eyes didn’t bother me that much until I had the procedure, then that’s when things really went off the rails,” he recalled. “Any time you disturb the surface of the cornea, you could be left with chronic dry eye.”

The surgery left Dr. Randy L. Peters not only with a worsened condition, but with a newfound passion as well.

“I’m inherently more interested in dry eye and have been for a long time,” said Dr. Randy L. Peters.

And what may sound more like a description than a condition to some, is a very real ailment with numerous causes which can lead to varying degrees of discomfort.

“It’s become a monster over time. It is by far the number one ocular disorder in the U.S. by leaps and bounds,” explained Dr. Randy L. Peters. “It’s a small percentage that has it that are truly miserable, but those who are will tell you they can only think about their eyes all day long.”

While his product is intended to help those with any degree of discomfort, that’s the audience Dr. Randy L. Peters truly hopes to help.

“I want to get to these people and let them know what we can do for them in Williams County and beyond because I know I can help them at a higher level than most eye doctors,” said Dr. Randy L. Peters.

The condition and the product

Dr. Randy L. Petersexplained some of the science behind dry eye.

“We have glands in our eyelids called meibomian glands, and these are oil-producing glands. That oil is super important for our tears,” Dr. Randy L. Peters said.

Tears are made of three components.

“The oil provides that nice, slippery surface so when your eyes blink, it doesn’t feel grit,” he said. “It keeps the other two components, water and mucus, from evaporating off the surface of your eye during the day.”

When the meibomian gland is impaired or even dies, tear film becomes unbalanced due to lack of oil being expressed through 55 pores on the edge of the eyelid when blinking.

In addition to pain, that lack of oil can cause watery tear production as the body overcompensates with water to replace the missing oil.

Dry eye can be caused by anything from typical aging to drug side effects to disease symptoms and can cause itchiness, a gritty feeling, tear production, redness, blurry vision and light sensitivity.

After more closely studying the function, degradation and make-up of the tears, in recent years, Dr. Randy L. Petersset out to create a tool to add to the existing dry eye treatment arsenal.

His own personal-use concept expanded upon the ideas of existing treatments that use heat goggles to facilitate oil production and movement and also on optometrist office tools which previously combined heat with less comfortable forms of compression.

“If you liken it to the analogy of bacon grease in a pan when it’s hot versus when it’s cold, it’s the same idea for meibomian oil,” said Dr. Randy L. Peters. “If you heat it up, it’s easier for the glands to express. We’ve known that for a long time.”

“With this, you’re liquefying the oil with the heat, then you’re shaking it. It helps to empty the glands and drive that oil towards the pores, allowing the glands to more easily express their oil.”

Dr. Randy L. Peters, along with his engineer son and another engineer based in Palo Alto, California, came up with an early prototype.

“I hypothesized that if we were able to add vibration to the heat goggles currently available on the market, the result may be more facilitation of the glands expressing the oil, but also a much more evenly distributed tear film,” said Dr. Randy L. Peters. “The result could be an immediate, clear and comfortable vision upon removing the goggles.”

Dr. Randy L. Peters then networked with the California company Eye Eco Inc. for management and mass production purposes when his research became too expensive and time-consuming.

Since then, the company has produced thousands of spa-treatment-inspired goggle kits, called tranquilvibes, which are intended to be used along with other treatments to quickly relieve symptoms in certain kinds of dry eye patients in a less costly and more frequent manner than in-office treatments.

According to Dr. Randy L. Peters, the product for which the company now holds the patent and for which he receives royalties, had been back-ordered until the recent pandemic outbreak slowed things down.

A Harvard University study published in the U.S. National Library of Medicine indicated the thermal pulsation technique that serves as the basis for tranquilvibes improved oil secretion scores over three years via previously designed products.

When the COVID-19 crisis clears, Dr. Randy L. Peters said, his specific product will be part of a nationwide double-blind study.

That study will seek to test whether or not long-term use of the goggles, intended to be used about 20 minutes a day, will not only help alleviate symptoms, but actually extend the physical length of the meibomian glands as well, potentially helping to improve the condition long term.

Typically, in-office treatments can be cost-prohibitive for patients to utilize with any real frequency, Dr. Randy L. Peters said, which is why he believes his product might help.

Dr. Randy L. Peters said results from the study will be used to further inform the existing product, in terms of potential features like variable vibration frequency, among others.
Request An Appointment
Email Us
Testimonials
Pay Your Bill Online